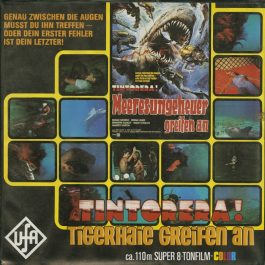 Abridgement in three parts of the Mexican-British horror film Tintorera (1977), also known as Tintorera: Killer Shark, directed by René Cardona Jr. and starring Susan George, Hugo Stiglitz, Fiona Lewis. Jaws rip-off.
Color has hardly faded, if at all, and is still good to very good.
Due to respooling, the parts titles of the second and third parts have been edited out. The first scene of the third part may miss a few seconds at the start.
Released by Ufa, Germany, as Tintorera! Tigerhaie greifen an.