A collection of silent film

About a year ago, my son and I drove from Bussum, a small town in the Netherlands near Amsterdam, all the way to Gothenburg, the second-largest city in Sweden. Goal of our trip was the home of a gentle Swedish couple who had been cleaning out the house of their deceased father and father-in-law. They had contacted me a month or two earlier: would I be interested in his film collection?

I certainly was. The collection was large (we needed ten hefty boxes for transport) and almost entirely consisted of silent features and shorts on standard 8mm. Now, silent film does not suit every collector’s taste, and neither does the standard 8 format. But I have been devoted to silent cinema ever since I bought my first super 8 film: Habeas Corpus, a silent Laurel & Hardy short – I must have been sixteen or seventeen at the time. So regardless of the value of the collection, I knew the trip would be worth it.

In the past year, most of the collection – which turned out to be very well preserved – has been listed here, and every now and then, I have even managed to sell a few films. But needless to say, the largest part of the collection is still waiting for its future caring owners.

This Swedish collector was especially fond of western movies, and I have created a special standard 8 western category for his sixty odd features and shorts, as well as a few similar titles I already had in stock. This category can be found here.

With the collection came a small stack of film stills, many of which were portraits of western stars. Some of these photos are from Swedish distributors, others have been acquired at memorabilia stores, such as the Larry Edmunds Cinema Bookshop in Hollywood. On this page, I have brought together a few highlights from this set.

Thank you, Swedish collector, for your great legacy!

Of all the early western stars, Tom Mix (1880-1940) was by far the most popular. When he entered pictures, he already had a rugged and adventurous life behind him – as a soldier, a deputy marshall and a rodeo rider – which certainly bolstered his reputation. Between 1909 and 1935, he appeared in almost 300 films, most of which were silents. His first efforts for the Selig company, one- and two-reelers mostly, were nothing special, though entertaining. After his transfer to Fox in 1917, his career really picked up steam. Mix was known to perform many of his stunts himself and specialized in action-packed, light-hearted yarns with little violence.

This still, printed on bromide paper, is a copy from the 1960s or 1970s. The signature has been copied into the negative. 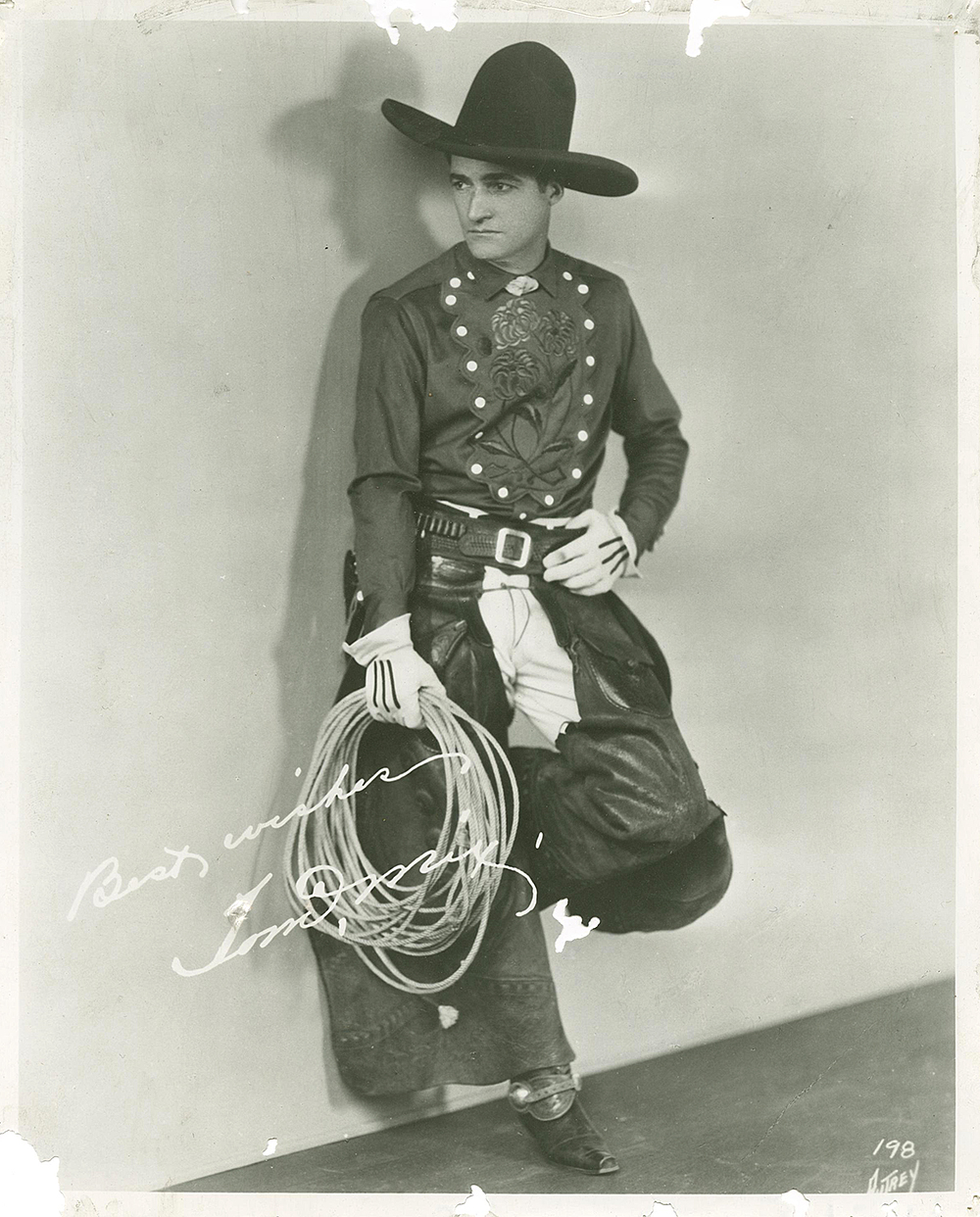 Today, William S. Hart and Tom Mix are probably the most well-known western heros from the silent era. Hart (1864-1946) started out in 1914 with Thomas Ince and was an instant success. He wanted to show the ‘real’ west and strived for naturalism. Compared to the films of Tom Mix, Hart’s shorts and features were less polished, and his stories and characters were more important than action and speed.

When I first saw this picture, I thought it was Hart in an uncharacteristic pose. But the more I look at it, the less I’m convinced it’s him. Anybody’s got a hunch? The print, on bromide paper and pasted on hardboard, is probably from after WWII. 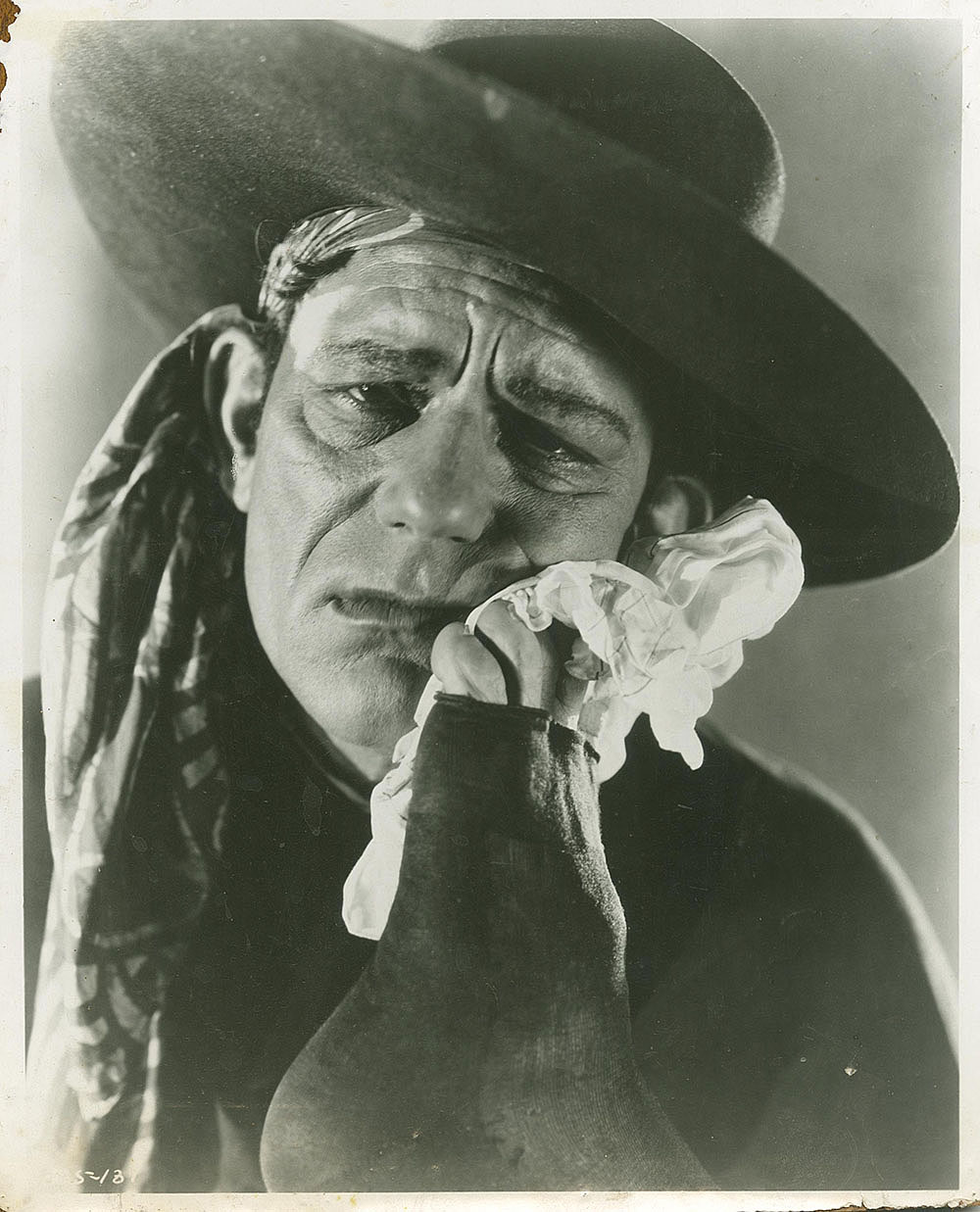 Hoot Gibson (1892-1962) made his first film in 1910 and quickly became a popular western star, ranking second only to Tom Mix at the box-office. He made a successful transition to the talkies and was active until 1960. Fred Thomson (1890-1928) also was a very popular and high-paid movie cowboy, but his career was only short-lived as he died early.

Hoot Gibson (in hat) and Fred Thomson (hat in lap). Both stills are copies on bromide paper. 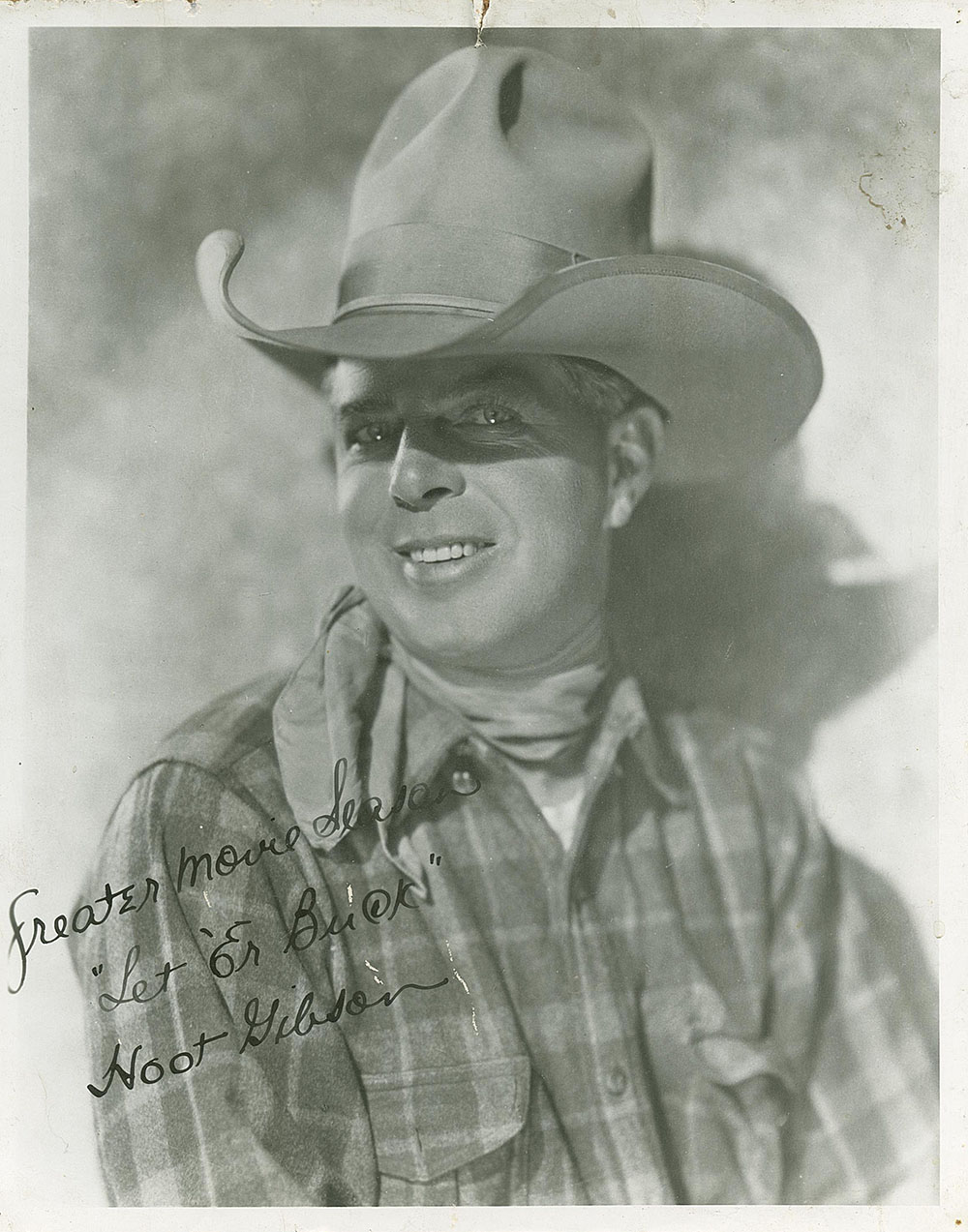 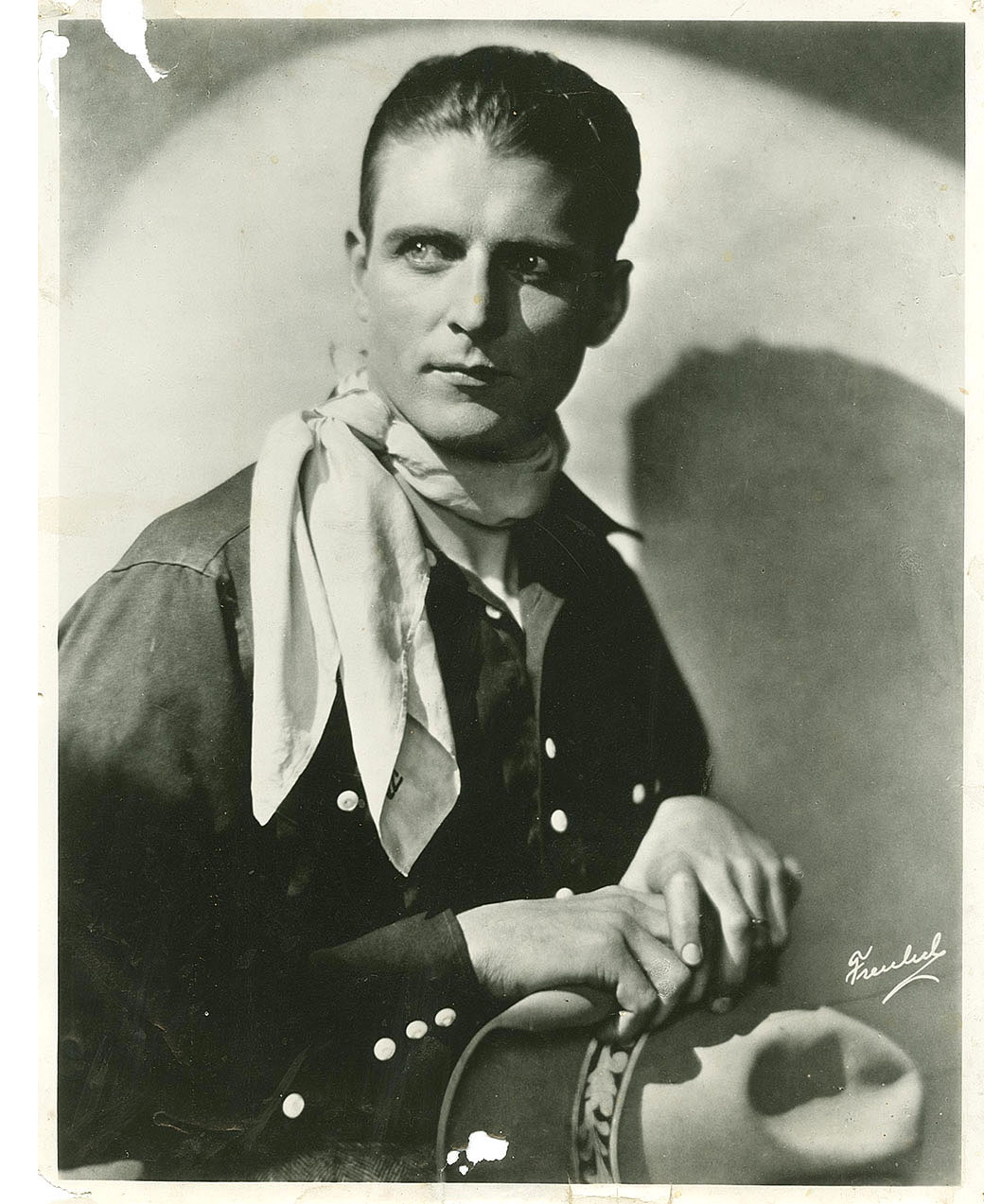 William Boyd (1895-1972) started out as an actor in 1918. In his early career, he didn’t play in westerns at all. His career break came when he starred in Cecil B. DeMille’s The Road to Yesterday (1925). Other DeMille pictures followed, most notably The Volga Boatman (1928), which firmly established Boyd as a romantic leading man. This all changed in 1935 when Boyd was cast as the lead in Hopalong Cassidy. A string of other ‘Hoppy’ films followed, forever securing Boyd’s name in the western hall of fame.

This portrait photo is a vintage print on bromide paper. ‘Received on June 26, 1926’, its former female owner wrote on the back. She must have asked for the photo at Boyd’s then studio. The signature is in the negative. 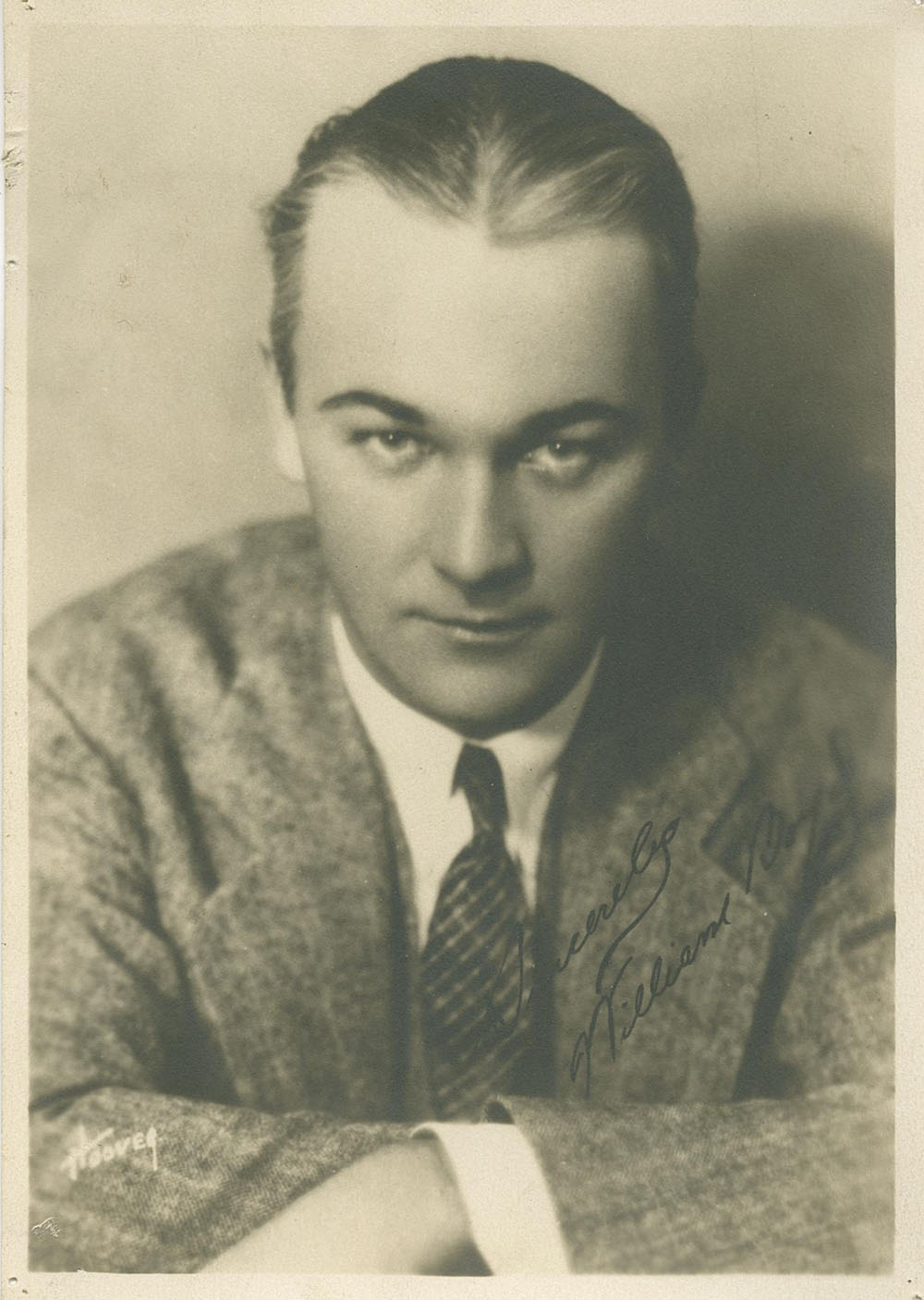 As this handsome photo of a latin cowboy is pasted on hardboard, I will never know whether the actor’s name can be found on the back. It’s not Ricardo Cortez and it’s certainly not Rudolph Valentino. Can anybody help? 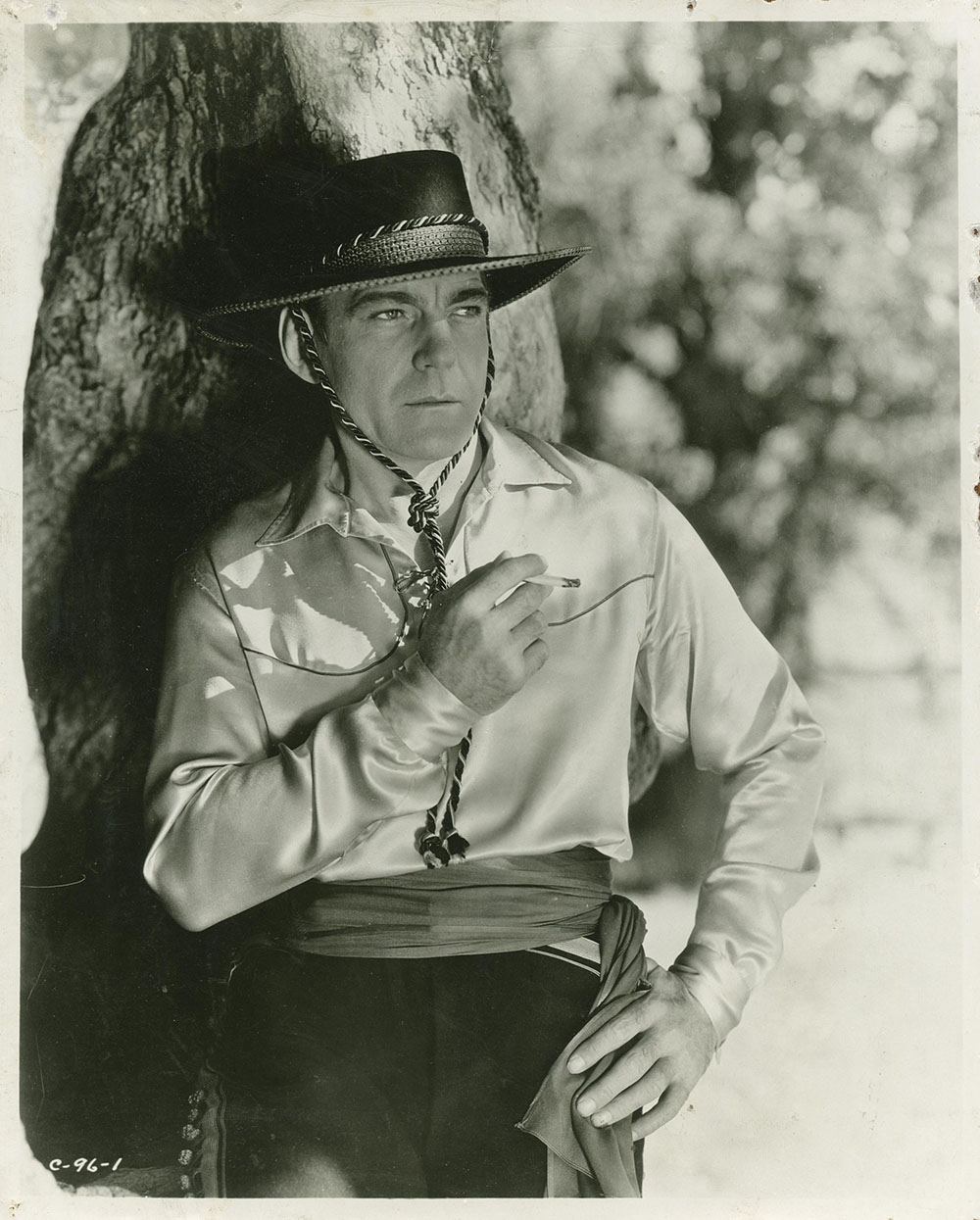