Judging by the number of films they released, Mountain Films may have been the largest 8mm distributor in the UK. This catalog from the 1970s is not dated, and consists of a bunch of loose, unpaginated leafs held together by a plastic clip – a binding style which facilitates updating of separate pages, so there may be other versions of the catalog out there.

The vast majority of Mountain’s releases were digests of feature films and shorts. On the last two pages, their slightly abridged 4x400ft features are listed, but the well-known complete features from RKO, King Kong and Top Hat, can’t be found. As far as I know, these were released in 1977, so the catalog must have been printed in or before that year. The introduction to the catalog gives another clue, where it says that ‘Mountain Films have been involved in Ready to Show films for over seventeen years’. Unfortunately, I haven’t been able to find out in what year the company was established.

For specific types of films, Mountain used various imprints such as Starline Movies, Cinevision and Showtime Movies. These releases are scattered all through the catalog and the imprints are not always clearly marked. Heritage Films became another imprint of Mountain Films after Mountain acquired that company and decided to stick to the original film boxes.

The Marx Brothers, pictured above in A Night at the Opera (1935), were Mountain Films regulars. 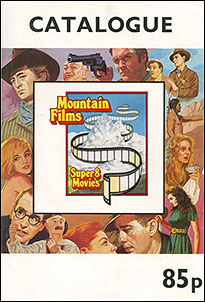