Filmoffice was the leading French 8mm distributor, well-known for their large collection of cartoons and short comedies, with some nice feature films to match. Many of their cartoons – for instance, most Tom & Jerry titles – had gorgeous color, and as these were often printed on low-fade color stock, they are still much wanted by collectors.

Most of Filmoffice’s American and English films were dubbed in French, but some American cartoon series (Tom & Jerry, Popeye the Sailor) were issued with the original soundtracks. To avoid confusion, we always indicate the language of the soundtrack in our film descriptions.

An interesting feature of the Filmoffice catalogs is the exact length in metres given for certain films. Apparently, for some film categories the company did not standardize on length. So the abridged version of Rio Grande was 370 metres, whereas Trail Street was 322 metres.

Pictured above is a still from Jean Cocteau’s Le testament d’Orphée (1960). 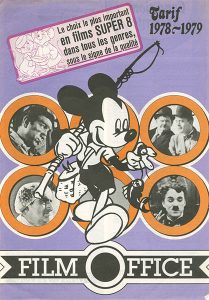