Heritage Films was a small British 8mm manufacturer who released some very interesting features, such as The Outlaw, They Clash By Night and A Night in Casablanca. Digest versions of these and other features were also available. The company is famous for a small number of rare cult digests, which are much sought after among collectors of horror and sf: The Wasp Woman, The Beast from Haunted Cave, The Monster from Piedras Blancas and Plan Nine from Outer Space, which was once voted the worst film of all time.

There’s no year in the catalog we have reproduced, but I think it dates from around 1966. Most films are available in both standard 8mm and super 8mm versions, so the catalog was probably published shortly after the introduction of super 8, which was in 1965.

Pictured above is Jane Russell in a still from The Outlaw. 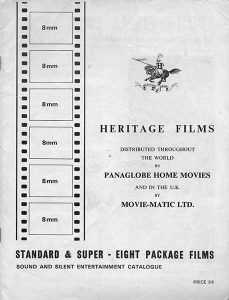