As a major and longtime 8mm distributor, Columbia Pictures has catered to generations of film fans and collectors. Their 1979 catalog, published just before video tape entered the picture, shows the company at its height.

Among the six new releases listed in Columbia’s 1979 catalog, two titles stand out. Both Close Encounters of the Third Kind and The Deep are well-edited and exciting digests. Other notable Columbia films are classics such as The Odessa File and On the Waterfront, the Three Stooges shorts, cult horror films (Creature with the Atom Brain, Scream of Fear), fantasy titles like The Golden Voyage of Sinbad, and a number of UPA cartoons.

The catalog has a special Super 8 Handbook section, with may serve as a primer on projection and maintenance.

A part of one page of our catalog was cut, so two or three films are missing. 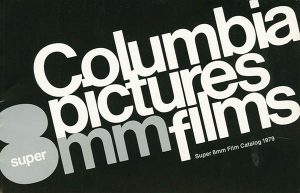